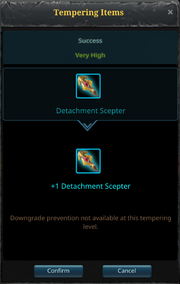 Tempering is the act of upgrading equipment through the use of tempering stones. Tempering items increases the weapon's base stats (Physical and Magical Defense for armor, and Physical and Magic Attack for weapons). Along with sealed familiars and the transcending stone system, tempering is one of three ways a player may enhance their gear, as well as the easiest and the one with the greatest effects.

How to Use Tempering[edit | edit source]

There are also Shining Tempering Stones, which represents a percentage chance of tempering success rate (30%, 40%, 50%). Those can be obtained by sending your Familiars to Familiar Adventures. Also, Blessed Elite Tempering Stones are guaranteed to temper a piece of equipment 100% of the time.

Tempering stones 230+ can be obtained from Hadakhan's Underground or Legendary Tomb of the Wyrm. These stones are mainly used to temper up Temmajin Gear beyond +10.

Once tempering stones have been acquired, right-click on the desired tempering stone and then left-click on the equipment to be tempered. A dialogue box will open showing a rough description of the success rate, with Very High being the highest chance of success, followed by High, Normal, Low, Very Low, and 0%. The equipment to be tempered will be displayed right below this success rating, and right below it will be displayed the result of a successful tempering, particularly the increase in its base stats. If the player is satisfied, they can then select Confirm to begin the tempering. Regardless of whether or not the tempering is successful, the stone will be consumed (although cancelling the tempering will not consume it).

Be careful since an item can downgrade starting at tempering levels of +10. At +15 or above the item can downgrade two or more levels. It is advised that starting at +12 you should start using elluns to prevent your items from downgrading when you temper your gear, elluns can be obtained by completing daily quests, achievements or special events.

Equipment can be tempered a number of times depending on the level, ranging from a possible maximum of 5 to 25. Higher level gears tend to have a higher maximum number of tempering levels. Legendary gear can be tempered between 20 to 25 times, while heroic quest gear can only be tempered 10 times for instance.

If you temper a item on +16 or higher an announcement will appear in the chat "Player tempered Item to +x". However, any +16 or higher item cannot be traded anymore even if you haven't equipped it before.

Tempering increases the base effectiveness of armor, such as physical and magic defense. It also increases the base physical or magic of weapons. This does not increase the extra stats and effects on the armor, and a +10 Brutal Karasha Boots will have the same strength bonus at any tempering level.

“This section is a work in progress and needs more information”